The theme “Mathematical tools for quantum physics and information" brings together research developed over several years at the laboratory level around the application of geometric methods to describe certain quantum phenomena such as entanglement or quantum contextuality. These non-classical phenomena are now considered resources in quantum information theory and their manifestations at the heart of algorithms and other quantum communications protocols are now tested experimentally.

This theme is fully in line with a series of research on quantum information carried out at the UBFC scale and involving mathematicians, physicists and experimenters at the regional level.

In 2017, the I-QUINS project (Integrated Quantum Information at the Nanoscale), led by the UTBM and bringing together researchers from 5 regional UMRs (ICB, FEMTO-ST, UTINAM, IMB, LMB) was labeled I-SITE BFC. This project has a double objective:

A second project led by the UTBM and funded by the Bourgogne Franche-Comté region, PHYFA (PHotonic platform for HYperentenglement in Frequency and its Application) in collaboration with FEMTO-ST, is more particularly dedicated to the study of entanglement in quantum algorithms with an experimental part on the photonic platform of the OPTICAL department of FEMTO-ST. 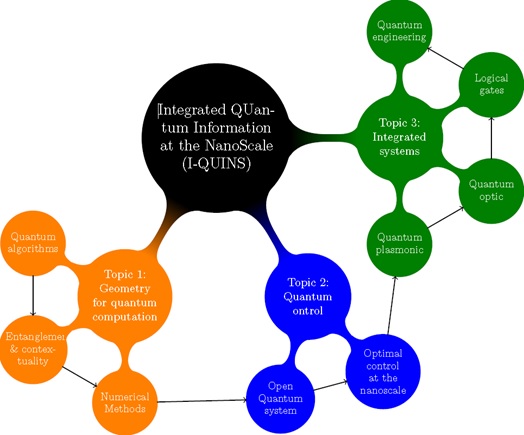