The laboratory Interdisciplinaire Carnot de Bourgogne is structured in 6 departments :

The ICB laboratory results from the merger of January 1, 2007 of three units: two UMR-CNRS (Mixed Research Units CNRS-University of Burgundy) located on the Campus of the Faculty of Sciences of Dijon, the Laboratory of Physics of the University of Burgundy and the Research Laboratory on the Reactivity of Solids, and of one more modest university reception team located in Le Creusot bringing together staff from the IUTs of Le Creusot, Chalon-sur-Saône and from Belfort-Montbéliard. 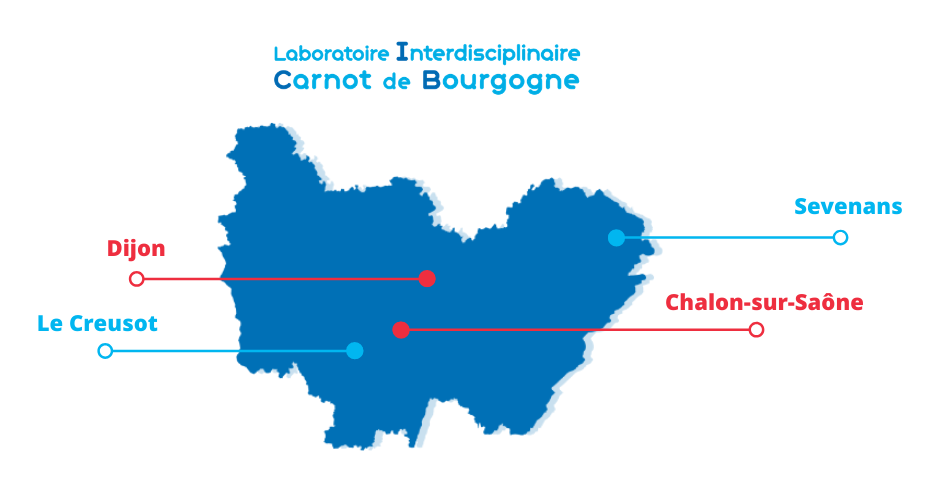 In optics, applications are aimed at detecting chemical reactions in planetary atmospheres, including pollutants and greenhouse gases, or even controlling chemical reactions by ultra-short laser pulses. Another important area is devoted to ultra-high speed fiber optic communications essential to the Internet, and to optical and quantum information processing for the all-optical computer of tomorrow, potentially a thousand times more powerful than today’s computer. The ICB is also developing laser sources for industrial applications: marking, surgery, defense, geology, waste sorting.

In the field of nanosciences, research targets the miniaturization of optical devices for information processing and biosensors for the diagnosis of cancer as well as the development of na-noparticles with multiple applications, in particular as vectors of new cancer therapies or as building blocks for massive new materials. For example, oxide nanoparticles are developed for the vectorization of drugs or as contrast agents in multimodal medical imaging combining simultaneously MRI, scintigraphy and optical imaging.

In the field of materials engineering, research is strongly linked to the industrial environment, in particular to the industries of the Bourguignon nuclear cluster (including Areva, Arcelor, Valinox, etc.) and the Francomtois basin (PSA, Alstom, etc … ). The studies are aimed, among other things, at energy storage, gas detection and separation, the design of high-performance concrete, corrosion of metals and their assemblies, treatment of metals by laser (one of the platforms of one of the most important power lasers in France is located in Le Creusot) or the production of intelligent sensors for controlling the structure of aircraft (partnership with Dassault Aviation).

In the context of Investments for the Future, ICB is involved in LabEx Action on intelligent systems integrated in matter and in EquipEx IMAPPI on pre-clinical imaging. The laboratory is a strong promoter of collaborative projects supported by Europe or the National Research Agency, and a main player in ISITE coordinated by A.DEREUX. Long-term partnerships link him to CEA and the Armenian Academy of Sciences. In 2012, the young researchers of the ICB distinguished themselves by obtaining a bronze medal from the CNRS and two European Research Council Grants of € 1.5 million each.