Different technical and research resources are available within the Creusot and Sévenans technological platforms. Studies have been carried out on these two sites in order to improve assembly techniques and the functionalization of surfaces using high energy processes (laser, electric arcs, thermal spraying).

These activities are carried out in the Laser Hall of the FLAIR platform (Le Creusot and Chalon site).

The fusion assembly of metallic materials, whether with conventional tools such as arc welding, or with precision tools, such as laser welding, presents a set of physical phenomena acting in strong synergy and is the subject of numerous studies aimed at understanding and quantifying the phenomena linked to the creation and behavior of welding. The study of problems related to fusion welding uses transverse experimental tools, such as temperature measurements, rapid imaging, image correlation, mechanical tests, metallography and XRD, MEB-EDX, EBSD analysis techniques,…, as well as digital tools allowing to simulate or model the fields of temperatures, stresses, velocities of the liquid, associated with welding.

Our main lines of activity within the framework of the study of assembly of metallic materials are the following: 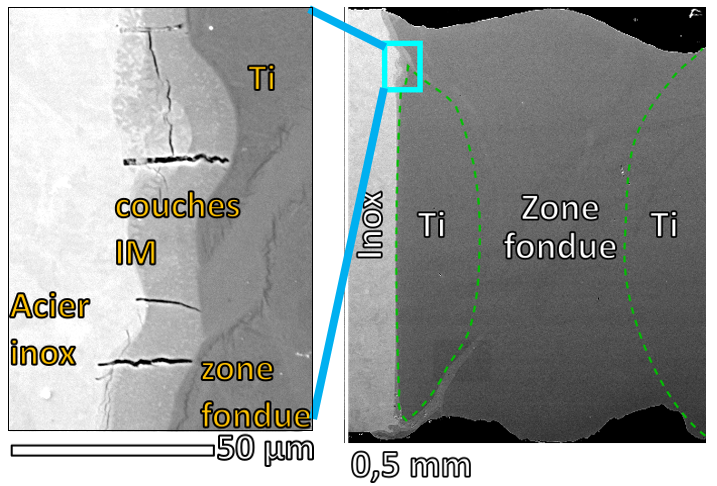 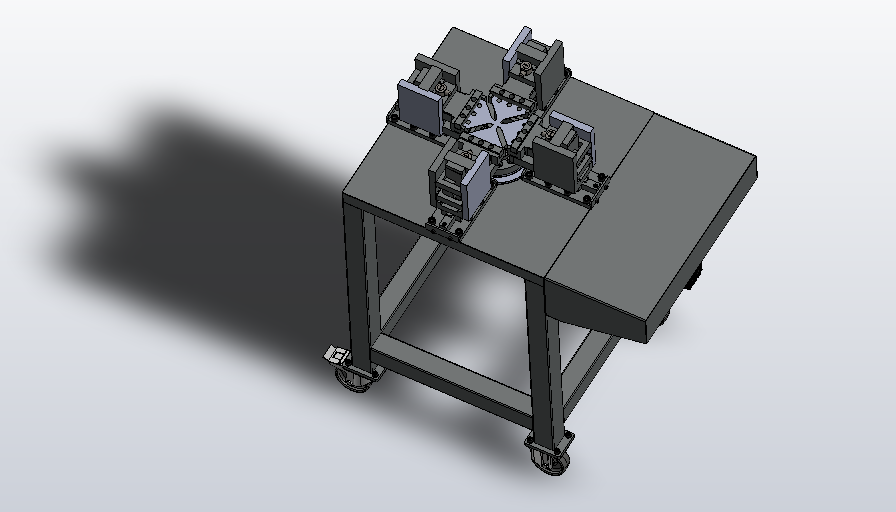 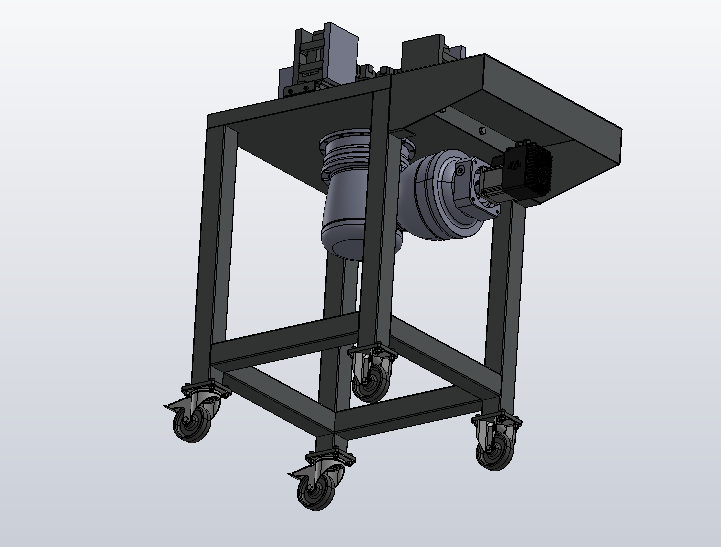 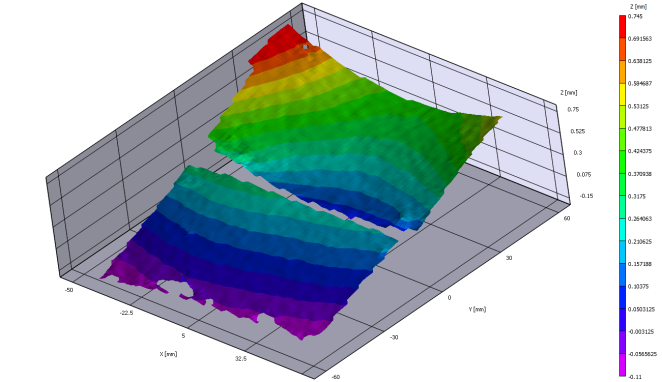 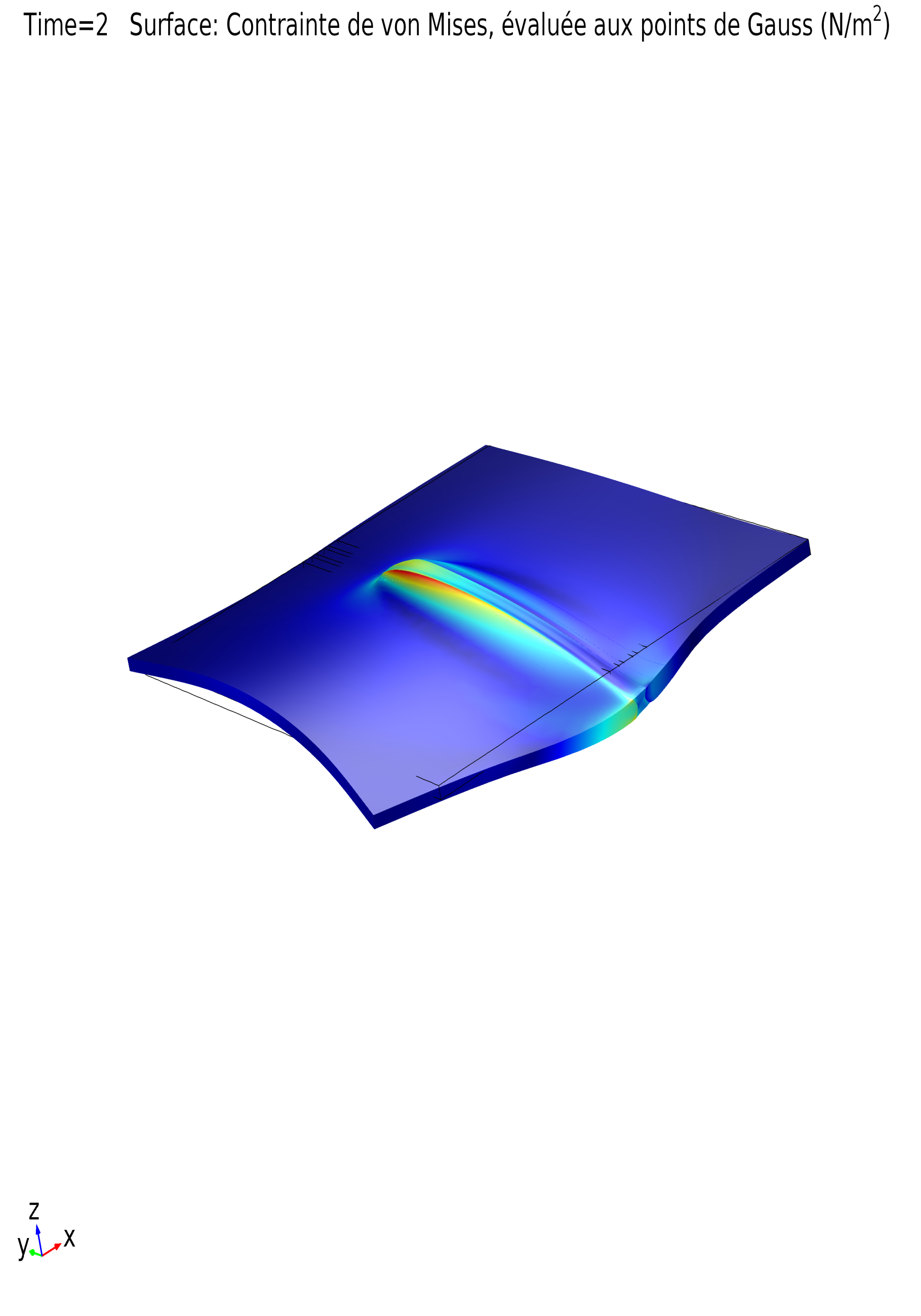 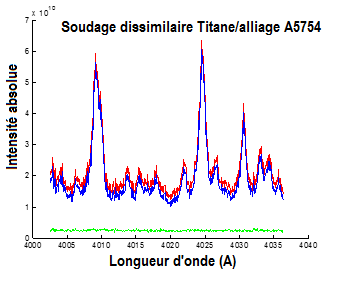 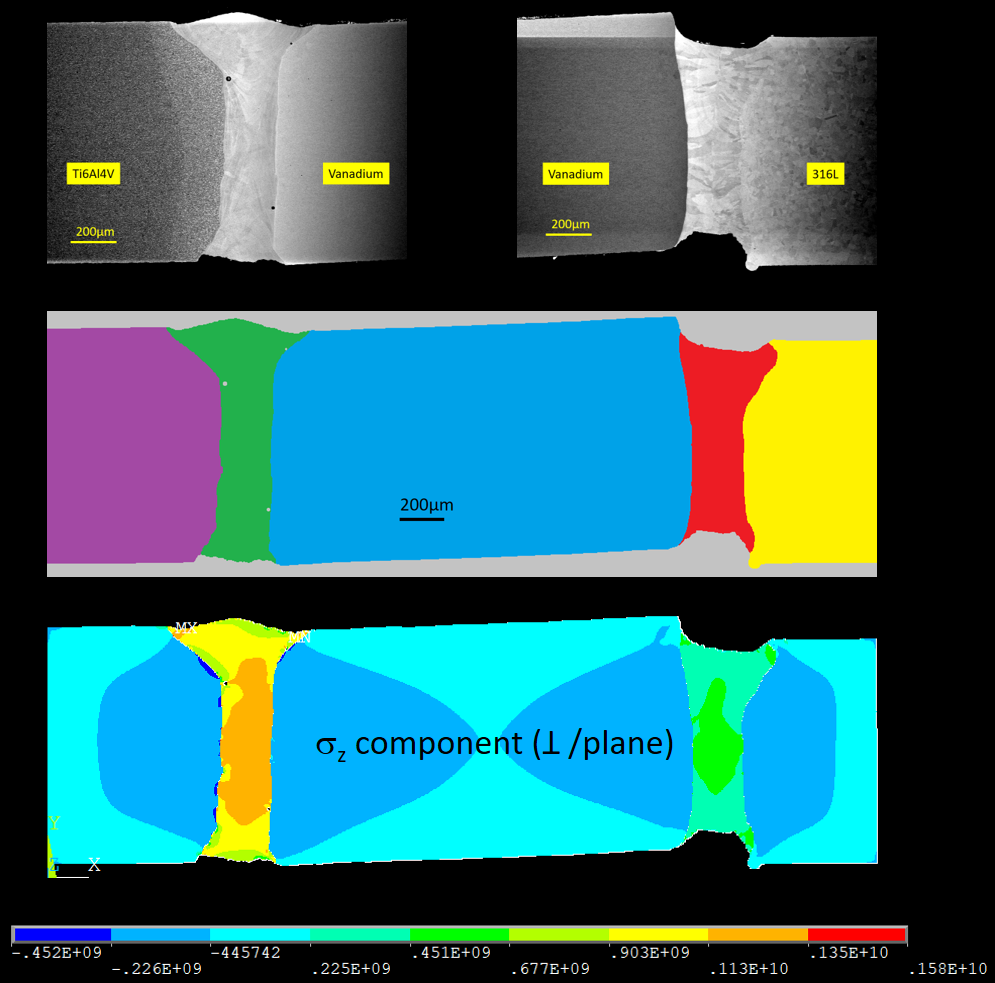 These activities are carried out within the LERMPS platform (Sevenans site).

Thermal spraying consists of using an energy source to melt and accelerate a fragmented material (before or after fusion) with the exception of cold spraying based solely on the deformation of the material. The different processes in thermal spraying are defined mainly by the energy source used (combustion, electrical discharge).

The process is conditioned by thermal and / or kinetic transfers between the projected material and the enthalpy source used. Kinetic energy is communicated to the particle by the speed and viscosity of the spraying gas mixture. The construction of the coating results from the stacking of particles on the substrate. The balance between the kinetic and thermal energy of the particles is therefore essential for the quality of the coating.

The main specificities of the team: 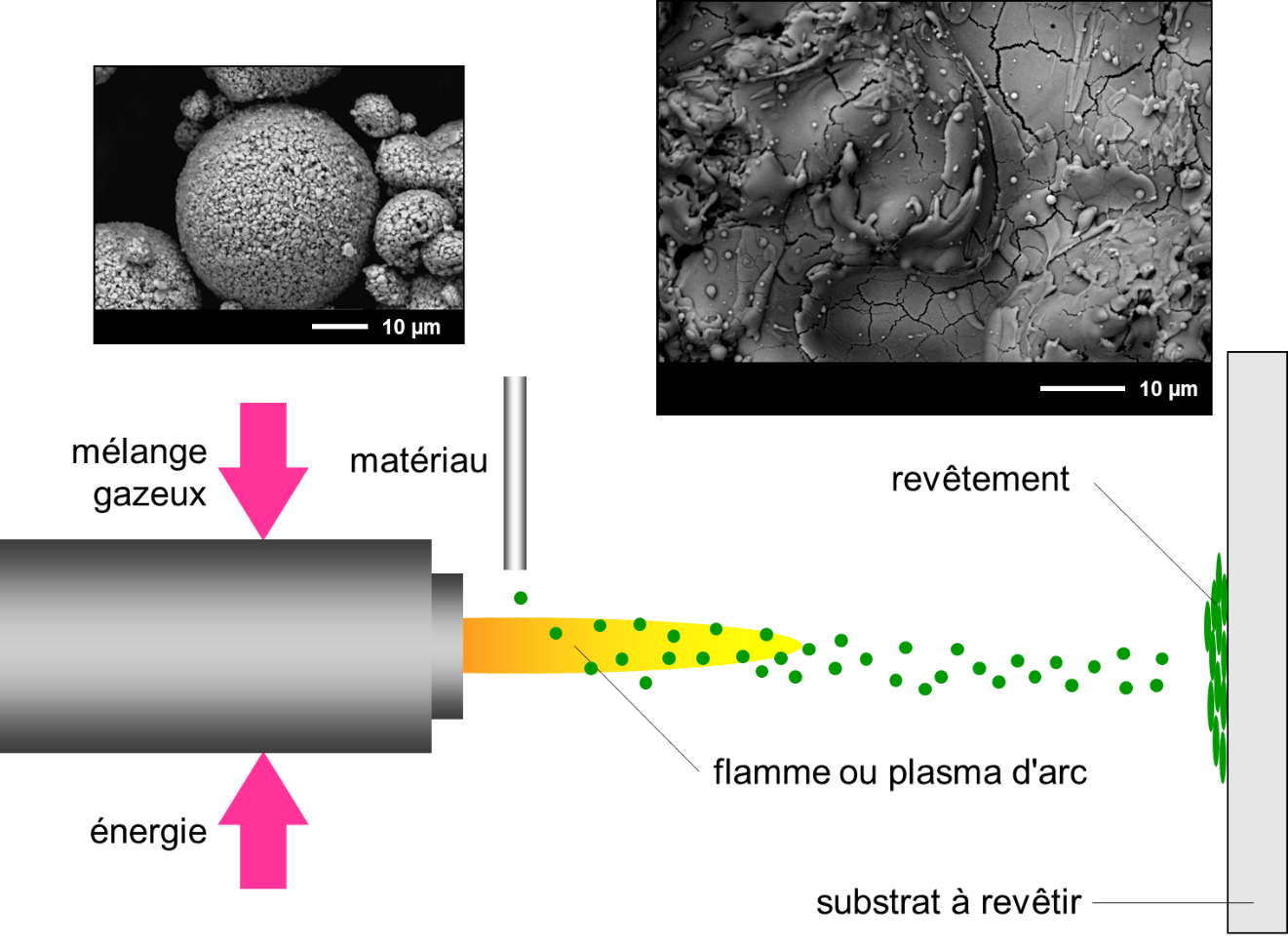 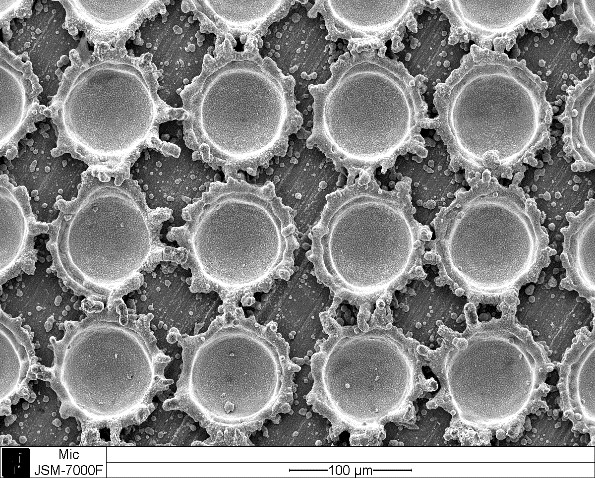 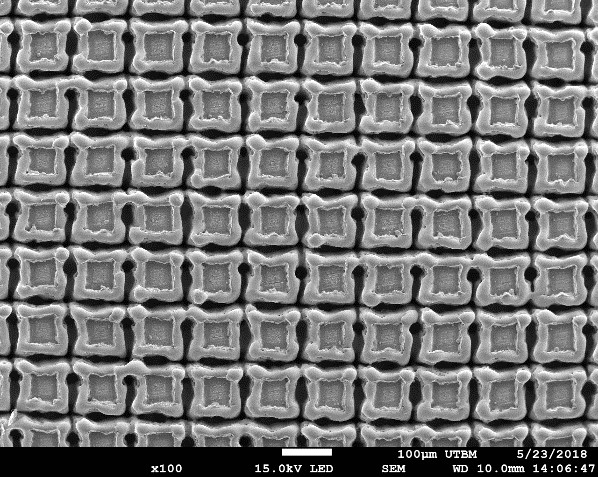 In order to achieve mechanical properties equivalent to those of the same materials but obtained by more conventional methods (forging, casting, MDP), the VPS projection process (Vacuum Plasma Spraying or also called LPPS: Low Pressure Plasma Spraying) was used . This process of thermal projection by a plasma torch of blown arc is carried out in a projection enclosure in which a reduced pressure and a neutral atmosphere (typically 50 to 200 mbar of argon) are regulated. The residual oxygen content in the enclosure does not exceed, for most projections, a value of 100 ppm, making it possible to avoid the oxidation of the particles and also of the substrate or substrate which can thus be brought to high temperature (500 to 1100 ° C). The advantage of this low pressure also lies in the speeds that the particles will reach, from 400 to 700 m / s, making it possible to obtain deposits with low porosity.

The technological program of shaping by thermal spraying focused on the one hand on the metallurgical and mechanical characterization of VPS materials and on the other hand on the study of concrete cases of shaping of parts. This program was initially supported (1992-1997) by SNECMA-Sochata, Turboméca-Tarnos and the SEP (European Propulsion Company) then mainly (1997 – 2016) by Ariane Groupe Vernon.

From a structural point of view, the materials obtained have porosity rates close to 1% and the microstructure, without post-treatment, can be recrystallized if the production temperature is sufficiently high (in the case of copper alloys in particular and also TA6V).

The heat treatments make it possible to obtain equiaxed microstructures and sometimes, depending on the conditions for carrying out the heat treatments, a reduction in the porosity. Compared to the same materials but produced by other processes, with identical heat treatments, it is noted that the VPS materials have a generally smaller grain size.

The mechanical characteristics of VPS materials are identical to those of conventional materials. Improved creep resistance is in most cases measured at the expense of a slight drop in fatigue results.

The year 2006 thus saw the complete realization of a prototype combustion chamber for an HM7 engine (3rd stage of the Ariane rocket) using technologies developed in collaboration with the company SNECMA-DMS, SAFRAN group. A scale 1 piece of 50 kg, 550 mm in height, multilayer, integrating 128 channels of width and variable height was thus produced.

In 2016, two smaller combustion chambers (nominal thrust of 10 kN with an expander-bleed cycle) were produced by shaping by the VPS process as part of the BOREAS project (Bench Optimized for Research and tEchnology mAturation at Subscale), funded by CNES. Tests on the R&T P8 cryogenic engine test bench from DLR Lampoldshausen (Germany). This multi-layer part incorporates 92 cooling channels.

Today, thermal spraying is also being developed in partnership with the LNCMI-CNRS (National Laboratory of Intense Magnetic Fields of Grenoble) with the Cold Spray process for copper alloys combining high mechanical resistance and high electrical conductivity. The hardening of the particles caused by cold deformation allows, while keeping an identical conductivity, to reach a higher elastic limit compared to the forged material. This higher elastic limit makes it possible to increase the magnetic field, this being generated by the passage of a high current density in tubes cut out in the form of a helix and fitted into one another.

Projection yields close to 100% are achieved and allow dense deposits up to 30 mm thick to be produced on supports with a diameter of 340 mm, i.e. masses deposited for the largest propellers of the order of 120 kg . The projection under a controlled atmosphere of helium makes it possible to increase the work hardening of the material and to limit any oxidation.