Bertrand KIBLER and Pierre BÉJOT, 2 researchers from the Interdisciplinary Carnot laboratory in Burgundy (Photonics department) have succeeded in generalizing the concept of conical waves described in massive media to structured media, such as multimode optical fibers, in which only a number discrete and finite fashions can spread.

This new approach, published in the prestigious scientific journal Physical Review Letters, allows the shaping of laser beams or complex light waves and unifies two highly studied areas of research: that of massive media (glasses, gases, liquids) and that of media. structured (optical fibers and other waveguides).

This theoretical work can also be found in other fields of research in wave physics, notably in hydrodynamics and acoustics. We can also draw a parallel between these phenomena and the Mach cones (shock waves associated with the supersonic boom) emitted by fighter planes. 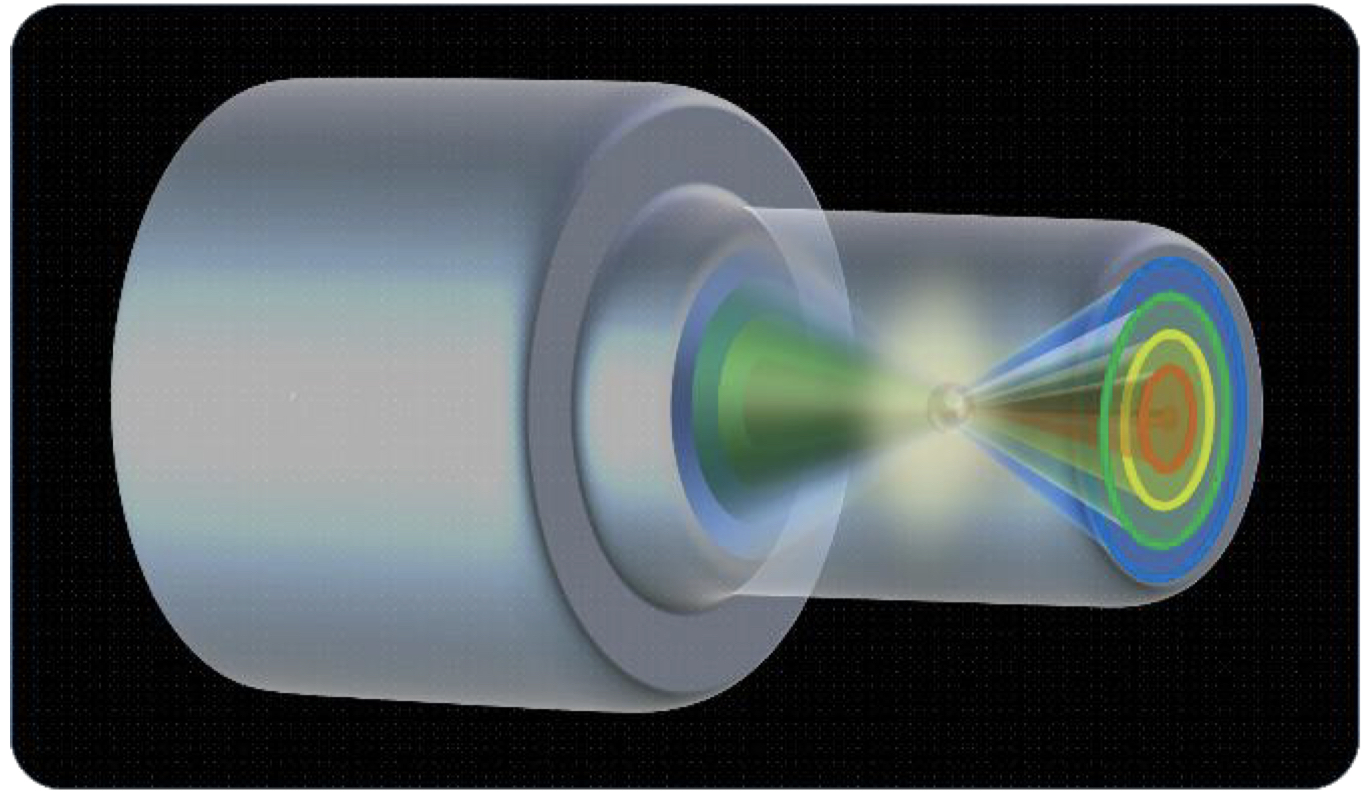 Illustration of a conical wave in the core of a multimode optical fiber.

New waves characterized by a complex spatiotemporal coupling, implying a specific link between their temporal, spectral and spatial characteristics, have been shown to be able to propagate without deformation with an arbitrary speed in different dispersive media, and more particularly in a guided manner in fibers. optics. Generally speaking, these waves are associated with a light flash (a temporal pulse or a shock wave) involving a continuous or discrete superposition of multiple frequencies (in phase) with a particular angular distribution. (for example: forming a cone in space, see illustration opposite). Different conical waveforms with arbitrary velocities can be envisioned with modern technologies of manufacturing and design of optical fibers and other integrated photonics waveguides. A key application example is the generation of guided balls of light (a special case of conical waves).

In a single-mode fiber, light can only propagate along a very specific path (called mode). So, a single-mode optical fiber is so small that the light travels as if it is going straight ahead. On the contrary, in multimode fibers, light can take different paths to propagate, as if it could “bounce" multiple times off the walls of the cladding. By taking advantage of the fact that, in a fiber, the “colors" composing an ultrashort pulse do not travel at the same speed (a phenomenon called dispersion) and that the different possible paths in a multimode fiber are more or less long, it is then possible to create laser pulses that absolutely do not deform during its propagation.

By generalizing the concept of conical waves described in massive media that the 2 ICB researchers succeeded in better understanding the transition between these two fields, which was still complex a few years ago due to intermodal nonlinear processes. and spatiotemporal couplings. Thus, future experiments on multimode fibers could reveal different forms of light propagation such as luminous supercontinuum balls.